Nobel-Prize-winning poet, WB Yeats, though inspired by Irish legend, landscape and longing, actually spent two-thirds of his young life among the London roadways and pavements grey in his much-loved poem, The Lake Isle of Innisfree, written here in Bedford Park and reflecting an exile’s urban/London experience crucial to shaping both Yeats’s (and Ireland’s) identity, and English literature.

Yeats spent most of his London years here with his Irish migrant family in Bedford Park (Chiswick, West London), the world’s first-ever garden-suburb, whose diverse, Bohemian, artists’-colony residents, fostered the young poet’s exceptional creative genius. Yet, until now, the only poet brought up in England to win the Nobel Prize has had no monument in England.

Though many authors, artists, actors, architects and others made Bedford Park their home after achieving fame, Yeats is significant in having been brought up here and inspired into creativity — and international fame, along with his brother Jack B Yeats — by its uniquely Utopian, progressive, aesthetic Arts & Crafts ambience.

What the Artwork Project Celebrates…

The signage by the artwork explains a little about WB and the talented Yeats family (painter father, John Butler Yeats, artist sisters, Lily and Lolly, and brother Jack B Yeats, Ireland’s greatest 20c painter), on Bedford Park itself as a social-experiment/architectural-gem, on the Arts & Crafts movement, and on the area’s many fascinating poets, painters, playwrights, publishers, philosophers, folklorists and anarchists and offers, at the click of a QR code, a guided tour around some great Yeats poetry-places in Bedford Park and beyond!

Unveiled by poet and former Archbishop of Canterbury, Rowan Williams, on 6th September 2022, just yards from Yeats’s boyhood London home at the ‘gateway’ to the world’s-first garden suburb with its beautifully conserved Arts & Crafts environment, the dazzling Yeats-inspired sculpture, #EnwroughtLight, by artist (and youngest Royal Academician), Conrad Shawcross RA envisions Yeats’s lines (set in silver in a Purbeck Stone plinth):
Enwrought with golden and silver light,
The blue and the dim and the dark cloths
Of night and light and the half light
The words are from Yeats’s He Wishes for the Cloths of Heaven, partly inspired by the poet’s unrequited love for Maud Gonne whom he first met here in Bedford Park, partly by his dream, as an aspiring artist, of creating works of great beauty, but also by his sister Lily’s Arts-&-Crafts tapestry-work for Wm. Morris nearby, and by Bedford Park’s underlying ethos of bringing aesthetics into the everyday as part of a work/life/art “balance”.

For many, Shawcross’s spiralling gyre will invoke flocks of birds in flight (Yeats’s poetry is rich with avian instances from rooks and white sea-birds to swans, and nightingales…

More about the artwork ▸

“Bedford Park is where the National Poet understood what it was to be impoverished, alien, exiled, became obsessed with a woman who would haunt his life and give rise to the greatest poetry of the 20th century. Surrounded by his extraordinary family and his radically revolutionary neighbours, Bedford Park whipped the beautiful young poet into the maelstrom of poetry that would give rise to a nation.”

Come along and join us as we launch an exciting and unique visitor experience focused on Conrad Shawcross’s artwork #EnwroughtLight and taking smartphone/tablet users around eight great Yeats poetry places in the immediate locale, each with directions, images, a short talk on the Yeats/Bedford-Park context/inspiration, and, at each, a Yeats poem on audio by 2022-Oscar-and-BAFTA-nominated actor Ciarán Hinds.

With tech-savvy, Yeats-project supporter Jeremy Vine showing us how it all works and starting off the trail: bring your smartphone/tablet and no, you don’t have to do the walk on the day, just enjoy the launch! 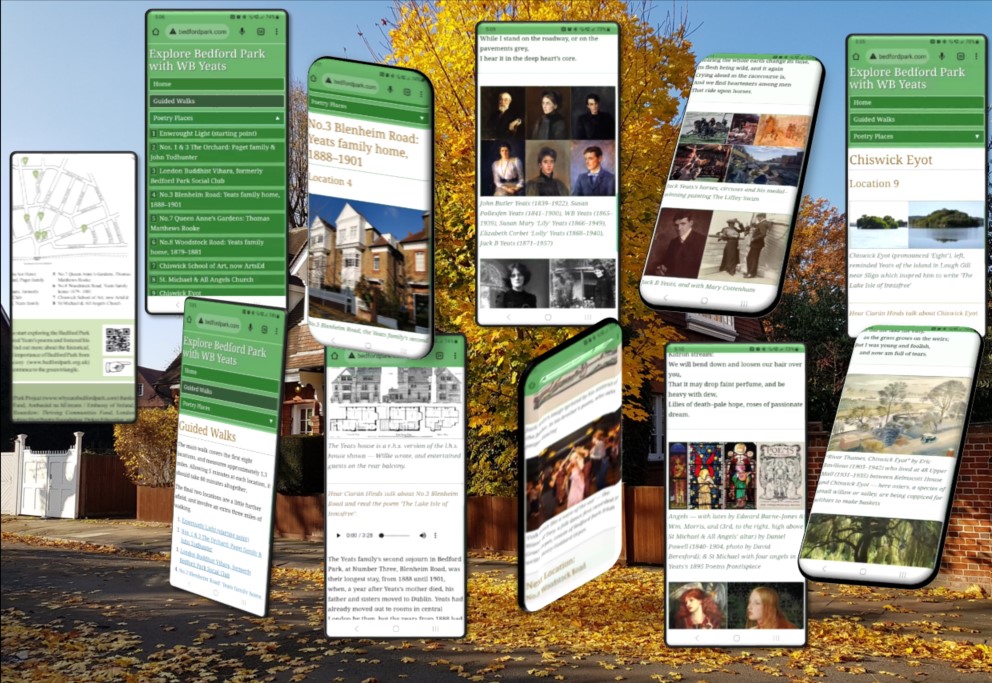 To explore the young Yeats’s unique artist-colony/first-garden-suburb neighbourhood with us, you’ll simply hop off London’s District Line at Turnham Green, head right, to Conrad Shawcross’s dazzling #EnwoughtLight (you can’t miss it!), click on the information sign’s QR code, and allow your smartphone or tablet to guide you around ten @YeatsBedfordPk poetry-places (or you can pop in and out, pick and choose) with images, short-info talks, and readings of great location-specific Yeats poems at each spot by 2022 Oscar- and BAFTA-nominated actor (and project patron and inspiration!) Ciarán Hinds. 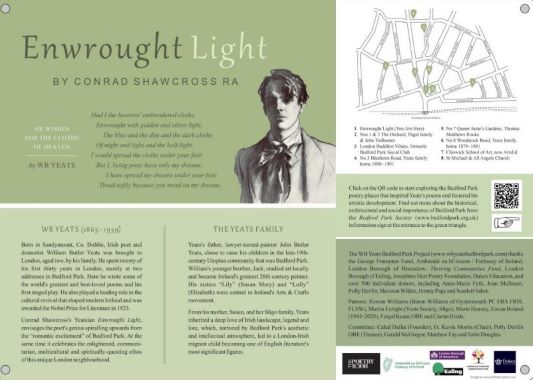 Information sign next to #EnwroughtLight, designed by Belinda Ashton as a donation to the project. (QR code above isn’t the code that launches the smartphone trail, which is only available on the actual signage in Bedford Park)

Thanks to an overwhelming public response we've already raised £184K covering initial infrastructure, professional costs, surveys, and planning application, the artwork itself including groundwork, foundations, plinth/base and engraving, delivery and installation, the creation of schools' Yeats/Bedford-Park workbooks, and the development of our Discover Bedford Park with WB Yeats smartphone #visitorexperience. Your donation now will go both to covering some of the past two years' increased costs since we set our crowdfund targets and helping us celebrate Yeats's Nobel Centenary Year with a range of 2023 events, as well as spreading the word worldwide about London's latest literary landmark and why it matters, and furthering our work with schools and community groups!

*UK taxpayers: you can increase gift value to the project by 25% at no extra cost to you; simply select ‘With GiftAid’ button above, and then tick to ‘share your address’ with us on payment page. By choosing GiftAid option you confirm that the donation is your own money, that you are a UK taxpayer, and have paid or will pay, in the current tax year, the amount of the donation or more in Income Tax or Capital Gains Tax.

The Lake Isle of Innisfree

I will arise and go now, and go to Innisfree,
And a small cabin build there, of clay and wattles
made :
Nine bean–rows will I have there, a hive for the
honey-bee,
And live alone in the bee–loud glade.

And I shall have some peace there, for peace comes
dropping slow,
Dropping from the veils of the morning to where the
cricket sings ;
There midnight’s all a glimmer, and noon a purple
glow,
And evening full of the linnet’s wings.

I will arise and go now, for always night and day
I hear lake water lapping with low sounds by the
shore ;
While I stand on the roadway, or on the pavements
gray,
I hear it in the deep heart’s core.