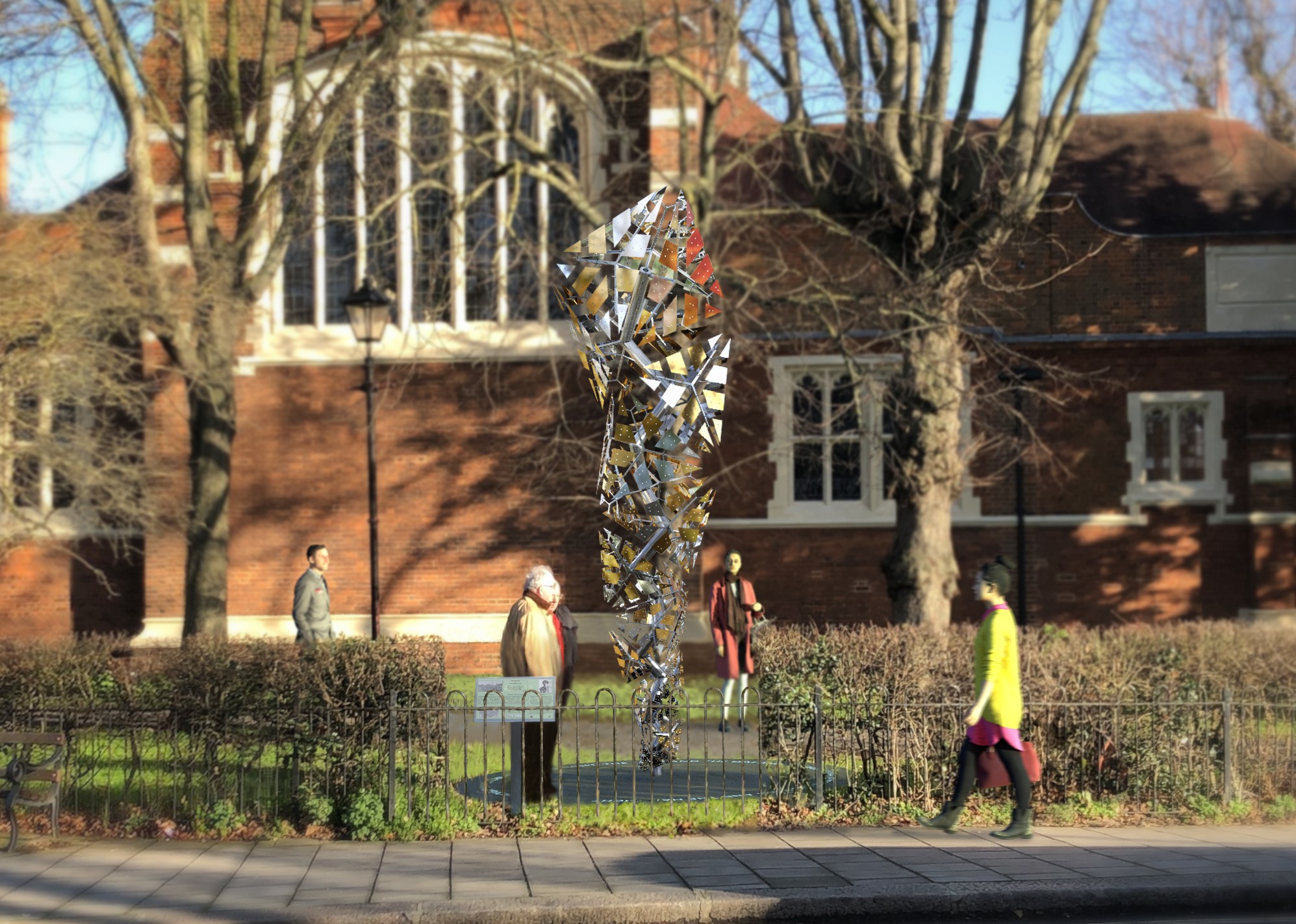 We’re set (thanks to all our backers, below) to unveil on 6th September 2022 at the ‘gateway’ to the world’s-first garden suburb with its beautifully conserved Arts & Crafts environment, this dazzling Yeats-inspired sculpture (left) by artist (and youngest Royal Academician), Conrad Shawcross RA with, engraved in a wide circular stone base, Yeats’s lines…
Enwrought with golden and silver light,
The blue and the dim and the dark cloths
Of night and light and the half light

The lines, inspiring Shawcross’s upward helical spiral, are taken from Yeats’s He Wishes for the Cloths of Heaven, a poem partly inspired by Yeats’s sister Lily’s Arts-&-Crafts tapestry-work for Wm. Morris nearby, and partly by Bedford Park’s underlying aesthetic ethos of bringing beauty into everyday life as part of a work/life/art ‘balance’.

For some, Shawcross’s shapes will invoke flights of birds (Yeats’s poetry is rich with bird life from rooks and white sea-birds to swans, and nightingales of gold enamelling in Byzantium). For others the piece will echo the foliage of Bedford Park’s leafy, wooded avenues (its escape from city to pastoral) or Yeats’s sacred Celtic hazel woods. For others still, perhaps, a choir of angels in flight, angels being not simply a key element in Arts-&-Crafts symbolism, in Yeats’s poetry, and in the design — by a Bedford Pasrk neighbour — of his 1895 poetry collection, but the dedicatees of the adjoining Church of St. Michael & All Angels.

Shawcross’s vision invokes, in contemporary artwork, such a form as Grecian goldsmiths make / Of hammered gold and gold enamelling to quote Yeats’s Sailing to Byzantium, and connects both with ancient Celtic gold-&-silver-work, and with the revival of gold and silver ornamentation in the richly Mediaevalist paintings of the Pre-Raphaelite Brotherhood, a number of whom shared William Morris’s aesthetic, lived in Bedford Park – John Butler Yeats’s reason for moving there – or exhibited at Grosvenor Gallery (co-director, J. Comyns Carr, brother of Dublin-born Bedford Park founder, Jonathan Carr).

Indeed the young Yeats himself painted, on his bedroom ceiling at 3 Blenheim Road (400 yds from the artwork’s planned location), a crowd of stars, a map of the constellations, and over the years filled his poems with moon and stars, light and flame, mirrors and reflections.

The vertically-rising form will invite the viewer, the passerby, to look upwards, as art and poetry ask us to ‘aspire’: much as Yeats, in one early Bedford Park poem bade his soul rise upward, just as he rose above, in his famous Lake Isle of Innisfree, London’s traffic-laden Victorian roadways and pavements grey. Yeats was a passionate believer in looking up with the lidless eye that loves the sun, in looking to clouds and star-laden skies, to flights of swans, to the even higher-flying eagle, in looking towards a cold and rook-delighting heaven.

Shawcross’s upwardly-spiralling flourish not only echoes Yeats’s archetypal towers and winding stairs, and his exploration of historical cycles in terms of spiralling gyres, but visually represents the upsurging of Yeats’s artistic genius at the heart of Bedford Park’s progressive, aspirational and aesthetic community, while invoking the very spirit of Bedford Park rising above the quotidian and spreading its communitarian concepts to a wider world.

Shawcross’s own unique artistic development (traced in the recent critical exploration, Psychogeometries) with its physics/metaphysics approach and its distinctive interests in both process, materials and craftsmanship on the one hand, and in fusing scientific and artistic sources of inspiration on the other – sources from literature, mathematics, choreography, mechanics, visual art and musical intervals/harmonics – approaches Yeats’s ideas of perfection in ‘Unity of Being’: Yeats himself, as a young resident of Bedford Park and pupil at nearby Godolphin School was, ironically, more successful in scientific subjects than he was in Latin and English.

It is appropriate, therefore, that we should celebrate the young Yeats as an innovative 19th/20th-century London-based arts practitioner interacting across all the arts and particularly committed to the arts in the public sphere, by engaging with our leading contemporary London sculptor (and the youngest Royal Academician), an artist whose work is currently defining public art in the capital and around the world, from artworks in country estates, museums and stately homes to public parks and communal spaces including recently, the Royal Academy courtyard’s Dappled Light of the Sun, Greenwich Peninsula’s highly-visible London-gateway Optic Cloak (enveloping artistically a significant eco-friendly low-energy heat and light source for 15,000 homes, a truly Bedford-Park-ish concept rebooted) and the iconic Paradigm, merging art and science outside the Crick Institute, the latter inspiring comparable public enthusiasm in London to that inspired by Antony Gormley’s Angel of the North in Newcastle/Gateshead 20 years ago! 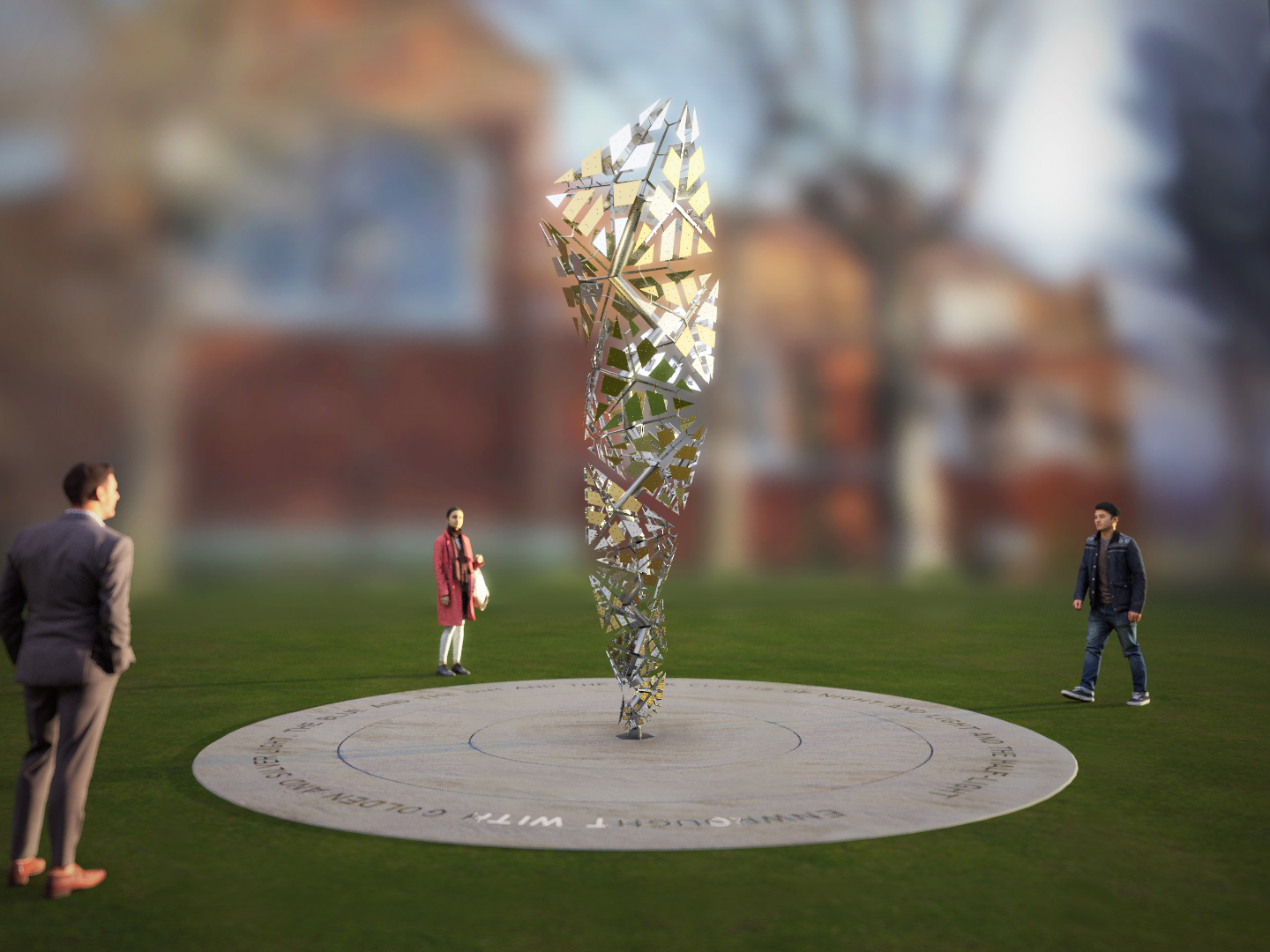 The artwork will be located:

Thanks to an overwhelming public response over the past year we've already raised Your donation now will fund ongoing maintenance and insurance as well as allowing us to expand further Yeats-in-Bedford-Park poetry events, to spread the word about London's latest literary landmark and why it matters, and to further our work with schools and community groups!

*UK taxpayers: you can increase gift value to the project by 25% at no extra cost to you; simply select ‘With GiftAid’ button above, and then tick to ‘share your address’ with us on payment page. By choosing GiftAid option you confirm that the donation is your own money, that you are a UK taxpayer, and have paid or will pay, in the current tax year, the amount of the donation or more in Income Tax or Capital Gains Tax.